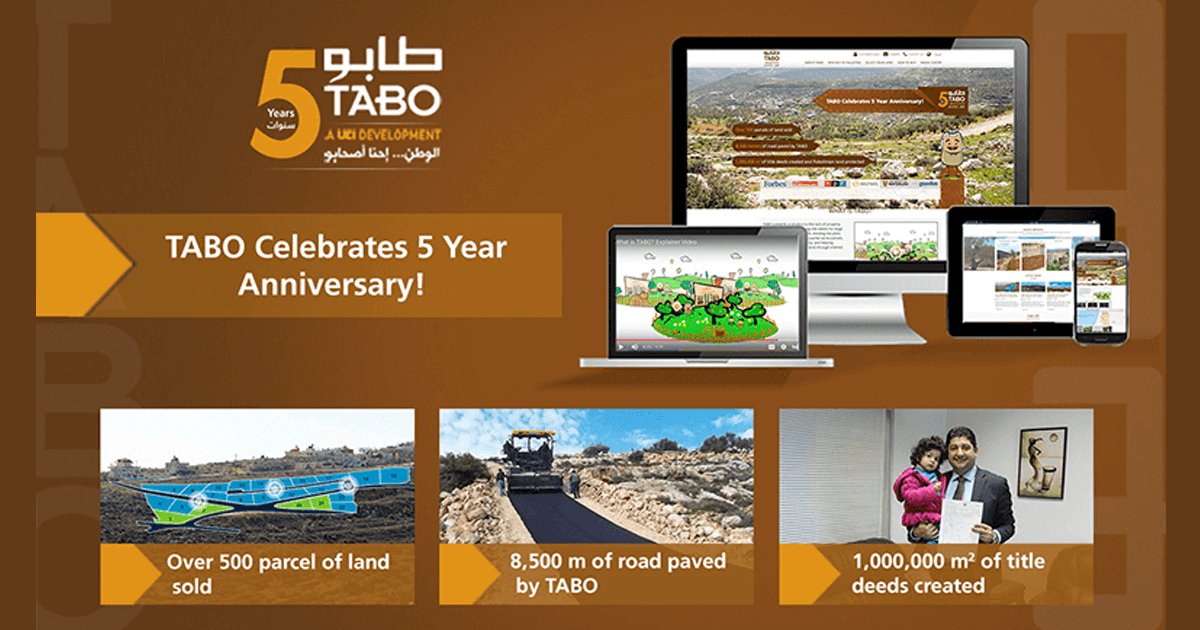 Ramallah, Palestine - Aug 25 2016 - Union Construction and Investment (UCI) is excited to celebrate the five year anniversary of TABO. TABO presents a solution to the lack of property rights in Palestine by creating title deeds for large plots of land in the West Bank, dividing the plots into affordable one dunum (quarter-acre) parcels, extending roads and electricity, and helping Palestinians own affordable land.

UCI’s CEO and Vice Chairman and co-founder of TABO, Eng. Khaled Al Sabawi, expressed his delight at the commendable progress the project has made so far.

“Over one million square metres of land in Palestine are now protected, 8,500 metres of roads have been paved, and over 500 plots are now in the hands of Palestinian families”, he said. “These are some of the incredible accomplishments that TABO has achieved over the past five years”.

Al Sabawi emphasised that the huge success of the project has taken place in spite of  significant difficulties and challenges that it has faced over the years.

“In such challenging times, the ability to create such a positive and sustainable project in the Middle East is a rarity”, he explained. “The fact that this project has flourished admits such difficult odds is all the more reason why I am so ecstatic to announce the five year anniversary of TABO”.

To coincide with the fifth anniversary, TABO launched a new  website interface with a new, visually stunning and cutting-edge design and multimedia elements. Users can now find a short and entertaining video - “What is TABO?” – on the homepage, which now provides a brief overview of the project and its aims.

While TABO and its staff are extremely proud of the growth of the project, they are now using the anniversary as an opportunity to look towards the future. UCI’s CEO assured that the coming years will mark a distinctive shift for the project, in which the hard work of its employees shall be directed towards the continual construction of infrastructure, alongside the issuing of further title deeds.