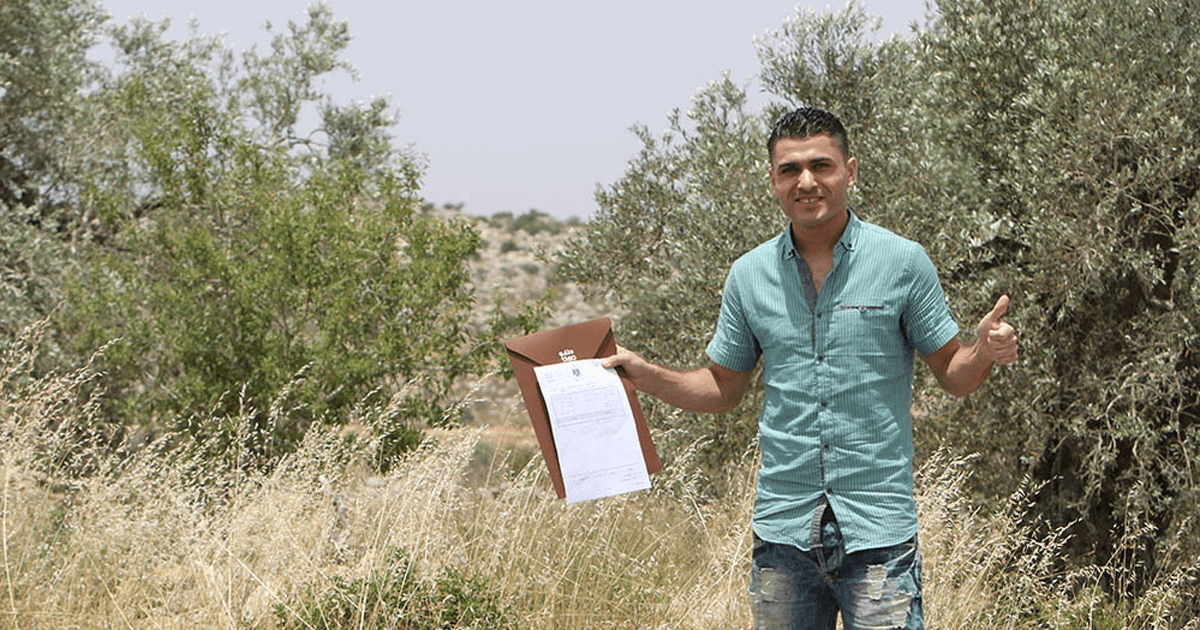 Hundreds of Palestinians have purchased land through TABO. But now, a national celebrity has been added to the list of owners. Ahmad Kashkash, a footballer with the West Bank Premier League team Shabab al-Khalil, has received his title deed for a plot of land in TABO’s master plan in Qarawa Bani Zaid, to the West of Ramallah.

“I had always been dreaming of owning a piece of land in Ramallah,” Kashkash said. “Tabo gave me the opportunity to do so by facilitating the registration of Title Deeds for the land, and arranging an affordable payment process.”

Shabab al-Khalil, based in the city of Hebron in the south of the West Bank, is one of the leading football teams in Palestine, and consistently competes for the top slot in annual soccer league. Kashkash himself is from Gaza and believes that buying land with TABO is an important way to resist the colonization of Palestinian land by Israeli settlements.

“I hope TABO reaches our people in Gaza, since this land is ours as Palestinians and this is a national project that aims to prevent and stop the settlements and the Israeli occupation,” he said. “I would like to thank TABO for this opportunity because it represents the right of Palestinians to their land, and prevents settlers from taking over the land and controlling it.”

Property rights and the fundamental right for Palestinians to own land in Palestine are guiding principles of TABO. An development under Union Construction and Investment, one of Palestine’s leading real estate and development companies, it gives Palestinians all over the world the opportunity to own a plot in their homeland, complete with a title deed proving ownership that can be passed down to their children.

Because 70% of land in the West Bank is unregistered, land remains vulnerable to illegal confiscation by the Israeli occupation. Title deeds like the one now held by Kashkash provide proof of ownership and protect Palestinian land.

“We’re thrilled that so many Palestinians living in Palestine and all over the world are taking the opportunity to own land,” Khaled Al Sabawi, Co-Founder of TABO, General Manager, and Vice-Chairman of UCI said. “By buying a plot with TABO, families and individuals can own a part of their homeland. They’re not just investing in security for themselves – they’re becoming part of a secure future for their community, too.”

In just a couple of years, TABO has sold over 400 of plots in areas all over the West Bank. In Qarawa Bani Zaid, Kashkash owns the title deed to land that is part of a master plan that includes green areas, paved roads, public space, homes and electricity infrastructure. Despite the skyrocketing land price in the West Bank being out of the financial reach of most Palestinians, all TABO land is priced at an affordable level.

Other title deed holders include Susan Abualhawa, the Palestinian-American writer, political commentator, and author of the bestselling Mornings in Jenin.

“We have worked tirelessly to make TABO available to all Palestinians. This includes years of planning and of course winning a landmark lawsuit against abuse of power in the Palestinian Lands Authority. We’re looking forward to welcome all Palestinians to become a part of TABO,” Sabawi said.