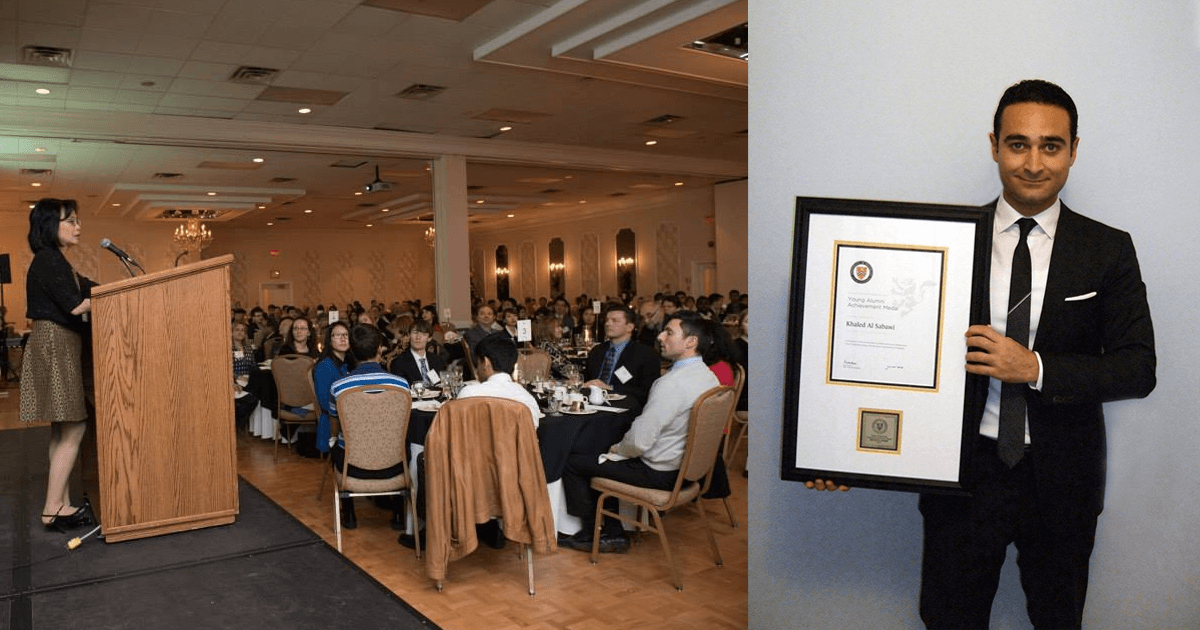 The University of Waterloo’s Faculty of Engineering, one of most renowned faculties of engineering in the world, has honored Khaled Al Sabawi, a Canadian entrepreneur of Palestinian origin, with its prestigious Young Alumni Achievement Medal.

At the 2014 Waterloo Engineering Awards Dinner held on November 25 2014 in Waterloo, Ontario, Canada, Dr. Pearl Sullivan, the first woman dean of Waterloo Engineering, presented the Young Alumni Achievement Medal to Al Sabawi for his exceptional accomplishments as an entrepreneur in both renewable energy and real estate development in Palestine.

Al Sabawi, the son of Palestinian refugees from Gaza who immigrated to Canada when he was three years old, earned his Bachelor of Applied Science, Honours Computer Engineering from Waterloo’s renowned Co-operative program in 2006. The Young Alumni Achievement Medal, created in 2009 to celebrate the 15th anniversary of the medal program, was established to provide tangible recognition of young alumni who have distinguished themselves through their professional achievements, community service or academic excellence.

During his acceptance speech, Al Sabawi stated: “It is very difficult for me to embody into words how honored I am to receive this award from one of the most renowned Faculties of Engineering in Canada. Dr. Sullivan, you have flattered me beyond words.” Poking fun at his time as a Waterloo engineering student Al Sabawi stated “Fighting to stay awake through 8 hours of lectures every day, I remember wondering to myself, am I the only one that doesn’t understand what the professor is saying? God, why do I keep drifting away and day dreaming about the girls that are absent from this program?” Al Sabawi stressed that were it not for Waterloo Engineering and especially its renowned co-op program, which gave him two years of work experience in five different industries, he would not have been ready to start a business right after graduation. Al Sabawi mentioned the obstacles he faced as an entrepreneur in the occupied Palestinian territories which included racial profiling and entry denials by the Israeli government, corruption in the Palestinian Authority, and unequal competition driven by a massive international donor aid industry.

Al Sabawi is the founder and president of MENA Geothermal, a green energy business, which installed the first geothermal systems in Palestine in 2007 and went on to install the largest geothermal systems in the Middle East. He is also the founder of TABO, a development project that is part of Union Construction and Investment, one the largest real-estate development companies in Palestine, which Al Sabawi manages and vice-chairs the board of directors. TABO offers affordable, registered plots of residential land in the West Bank. Al Sabawi was named "One of the World"s Top Energy Entrepreneurs" by Global Post in 2010, and was ranked the 195th Most Influential Arab by Arabian Business Magazines in their Top 500 Most Influential Arabs ranking for 2012. In 2013, Khaled received the prestigious Takreem Award for Young Entrepreneur at their highly publicized awards ceremony in Paris, France. In October 2014, Khaled was featured on the cover of Forbes Middle East with the caption beside his picture reading “Industry of the Impossible” in Arabic along with the a feature article titled “The Good Deed” in English.