Palestine: A History of Displacement 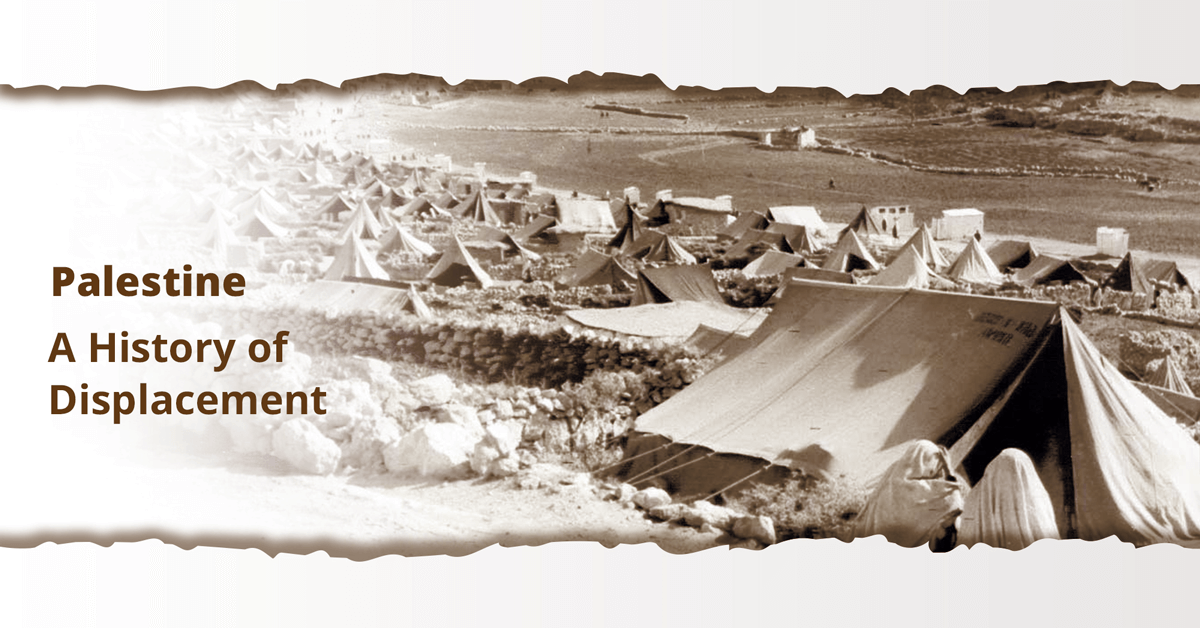 Today, Palestinians living under Israeli occupation are at severe risk of displacement and dispossession, yet this is not merely a contemporary issue. Since the early twentieth century, Palestinians have been subjected to waves of displacement from and within their homeland. Indeed, the modern history of Palestine is one characterized by territorial loss.

In 1914 Britain captured Palestine from the Ottomans, and British control was later formalized in 1922 by a mandate issued by the League of Nations, the forerunner to the United Nations. By the time of the mandate, Palestine had seen mass Jewish migration, motivated in part by the Balfour Declaration – a letter issued by the British government expressing its support for the creation of a Jewish state in Palestine.

In 1947, with the British fighting a counterinsurgency war with Jewish terror groups, such as Irgun and the Stern Gang, and keen to withdraw from Palestine, the United Nations put forward the ‘Partition Plan’. This plan would sever Palestine into two separate states: one for Palestinian Arabs, accounting for 44% of the territory, the other for Jews, accounting for the remaining 56%, despite the fact that Palestinian Arabs made up a 2 to 1 majority. This was a direct attack on the Palestinian right to self-determination – the right of Palestinians to rule over their homeland – and was rejected by Arab leaders. Historians would refer to the Partition Plan as an insult to democracy.

As British began to withdraw from Palestine in 1948, Zionist militias, including the largest militia known as the Haganah (who would later become the Israeli Defiance Force), flooded the streets and embarked on a campaign to drive Palestinians from their homes and villages. The expulsion and ethnic cleansing campaign of the Haganah would form the basis of what would later become Israel, and in the months that followed, at least 750,000 Palestinians were forced from their lands in an act of mass ethnic cleansing. Israel was founded on this stolen territory. In an attempt to relieve its future generations of the burden of Israel’s original sin, the common Israeli narrative today states that Arab armies attacked an infant Israeli state shortly after its creation. In reality, the Haganah and Zionist militias used violence and ethnic cleansing tactics to unilaterally acquire mass territory and expel Palestinian Arabs. Their acquisition of territory was only halted by Jordanian forces moving into the West Bank and Egyptian forces moving into Gaza.

Two decades later, in June 1967, Israel captured the Gaza Strip, Jerusalem and the West Bank during the Six-Day War, fought against the armies of Egypt, Jordan and Syria. Palestinians were once again forced from their homes through violence and intimidation, but the displacement did not end there. Israel, with the intention of colonizing these territories immediately began a huge program of illegal settlement construction and today there are more than 120 settlements and 600,000 settlers throughout the West Bank and East Jerusalem.

To clear the way for these settlements, Israel employs a broad range of unlawful and discriminatory methods to remove Palestinian presence from the land. Yet whether it be physical eviction, acts of violence or the cutting off of services, Israel’s ultimate goal is always the same: to control the maximum amount of Palestinian land, with the least number of Palestinians on it.

Lessons Must be Learned

The modern history of Palestine must serve as a clear warning that Palestinians cannot be complacent in the face of the grave threat to their human rights and homeland. Israel has clearly and repeatedly demonstrated its intention to displace and dispossess the Palestinian people, and this reality must be recognized and responded to. Lessons must be learned, and quickly. Palestinians must do all within our power to resist Israel’s land grab, and one of the most potent forms of resistance is for Palestinians to lay roots and invest in our homeland. Palestinians must protect their territory, and TABO represents one simple and affordable way of doing precisely this. For too long Israel has taken advantage of the helpless plight of Palestinians. Until today, huge areas of Palestinian land remain unregistered, and therefore vulnerable to Israeli seizure. Until this changes, a brutal history will continue to repeat itself.